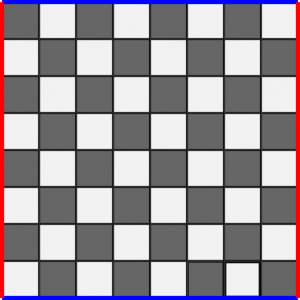 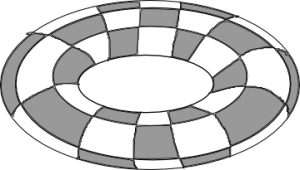 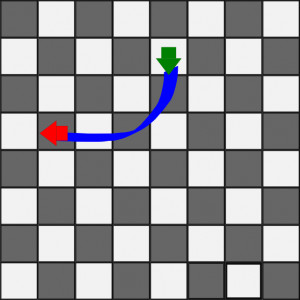 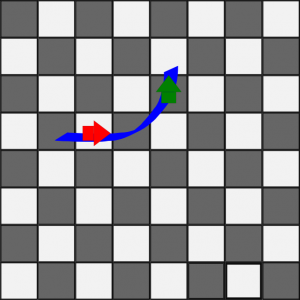 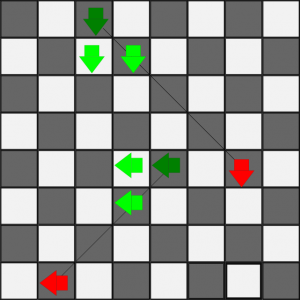 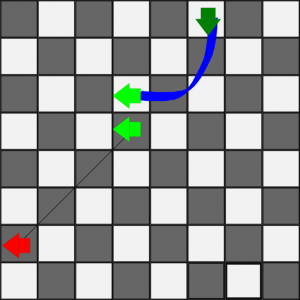 Like tens of thousands of other people imagining epic 3-dimensional doodling abilities, I purchased a 3Doodler on Kickstarter. Last weekend, I decided to sit down and actually try doodling something cool. 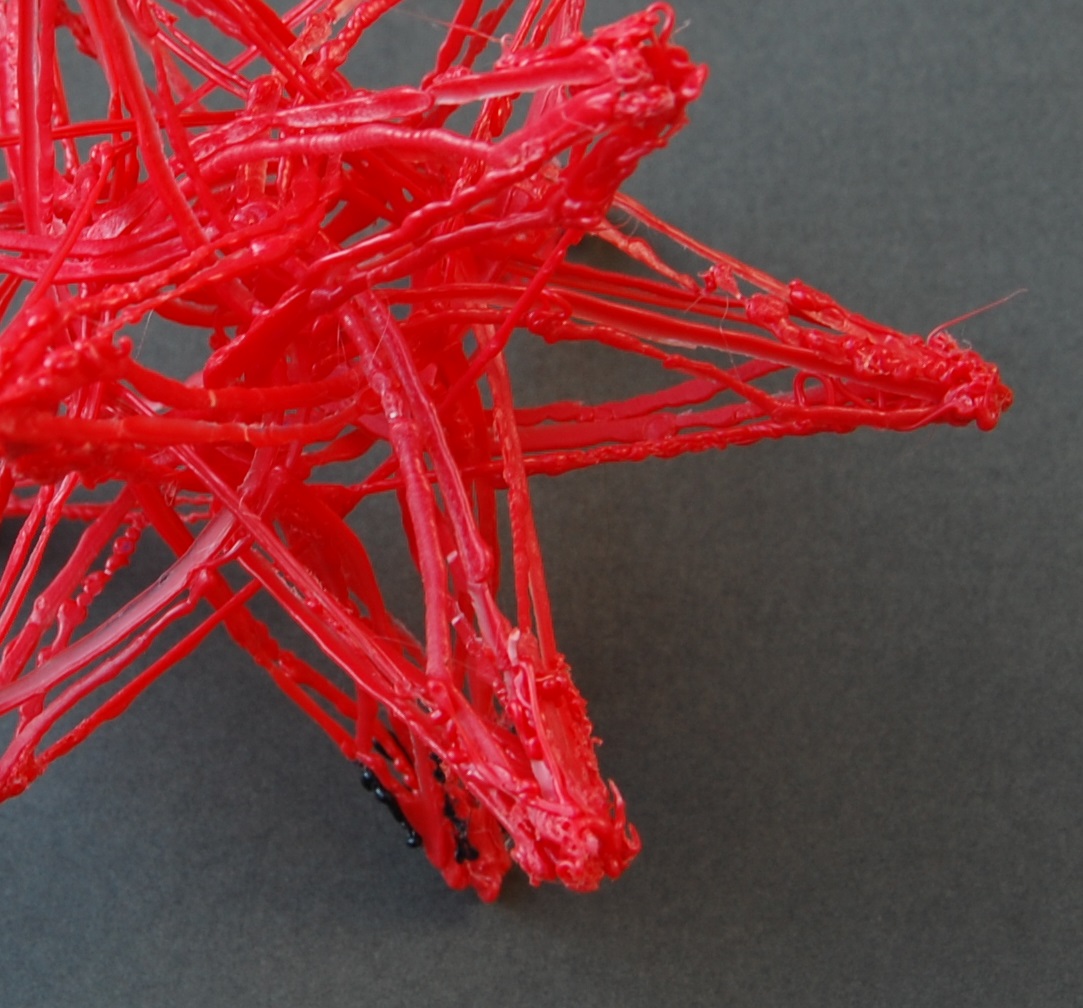 The first problem that I discovered when 3Doodling is that it really isn’t very easy to doodle accurately in the air. The plastic takes just enough time to dry that you still have to deal with sag. On the other hand, the plastic does detach easily from paper. People seem to mostly suggest tracing 2-D templates and then putting the pieces together.

My 3Doodled piece was made out of 20 interwoven 3-pronged pieces that were doodled onto a flat 2D template that I sketched out quickly beforehand. It is based off of the Medial Triambic Icosahedron. The red outline in my template below is representative of the full face of the medial triambic icosahedron. The blue line is the template I traced. This is a portion of the face selected such that the faces would spiral around each other rather than intersect in my final model. 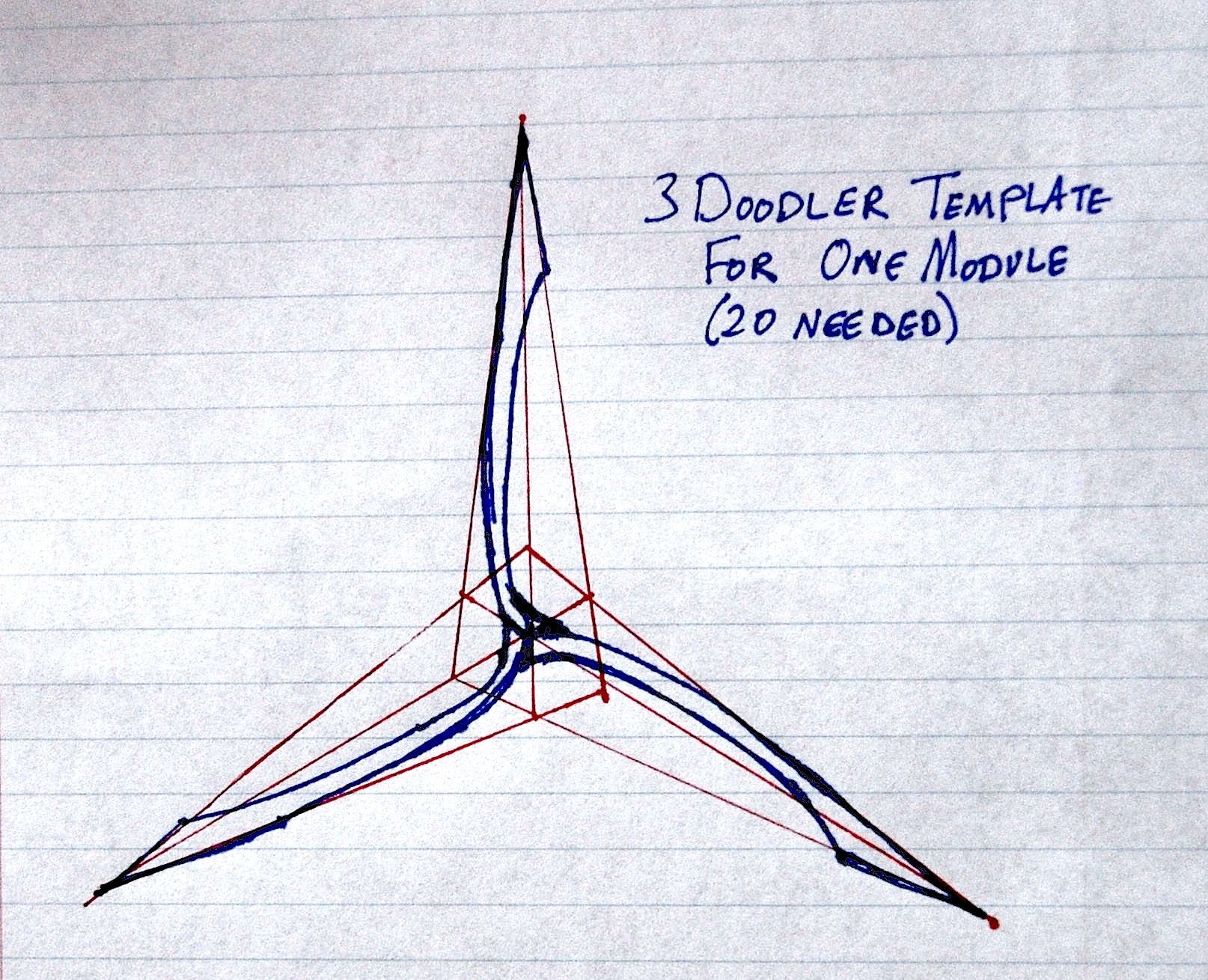 The second problem that is that (at least on my device) the feed mechanism is flaky and plastic comes out in spurts followed by nothing, which makes drawing accurately even on paper rather difficult. This problem makes drawing in air seem pretty impossible. My device also has a relatively minor issue of the top “fast” button having a tendency to catch and get stuck in the “on” position.

You can see the resultant unevenness in this close-up of one vertex where some of the lines are notably thinner or blobbier than others. 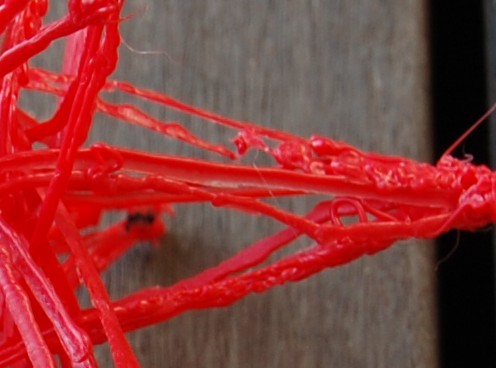 The last issue is that the 3Doodler is an ergonomic nightmare. Holding the 3Doddler for several hours while pressing the “extrude” button with my thumb gave me sufficiently severe thumb and wrist pain that I am unlikely to do much 3Doodling in the future.

All of this is unfortunate because despite it’s issues, the 3Doodler is really quite nifty and fun to play with. If I was able to use it without wrist pain, I would be seriously considering how to purchase more plastic (as you can see, I actually ran out of red towards the end of my model and started connecting corners with black). There is definitely something rewarding about drawing something very solid and physical, and as far as end results go, I was actually reasonably pleased with my doodle.

As I’ve mentioned before, a lot of models like this one cast impressive shadows. Here are some pictures of this model’s shadow.

What happens when you combine three recreational math artists with a fantastic pastry chef?

Last weekend, Vi Hart, Gwen Fisher, Ruth Fisher and I got together to try this experiment. Ruth provided several colors of shortbread dough and white chocolate “glue” and a few assorted cookie cutters. Gwen took photos (shown with permission below) and Vi took a bunch of video.

Our first idea was to make polyhedra cookies. The hexagon cookie cutter seemed to suggest truncated tetrahedra, octahedra, and icosahedra. We tried making one of each. 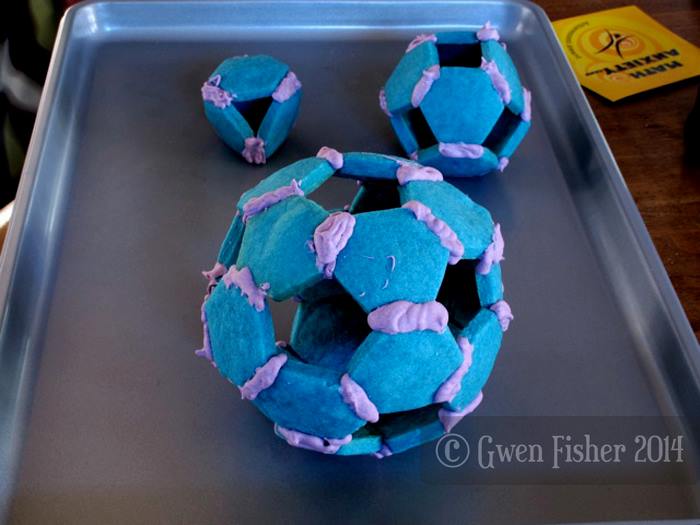 Assembly was a bit tricky and required the use of an assortment of cardboard jigs to keep pieces in place while the chocolate dried. 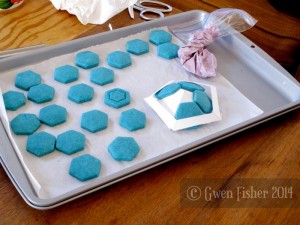 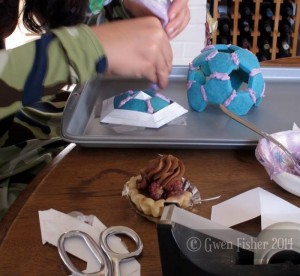 While our hexagon cookies were baking, Vi got started making a rhombic dodecahedron. We used a straight-edge to cut rhombi with the correct dimensions. 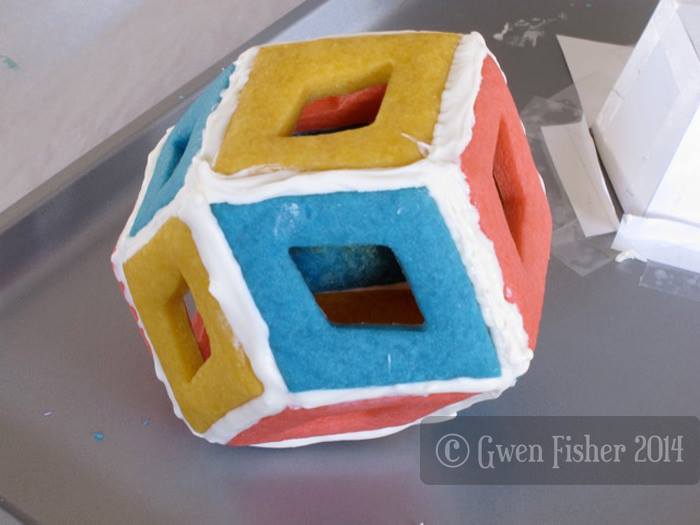 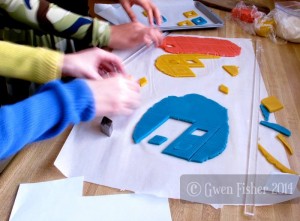 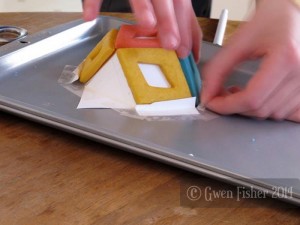 She wanted to have little cut-out holes in her polyhedron, and used a rhombic cookie cutter that happened to have just the correct dimensions to tile the plane nicely. 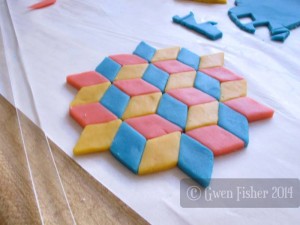 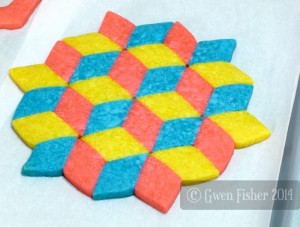 Which, of course, got us thinking about more interesting geometric tilings. For example, non-periodic Penrose tilings. Everyone likes the kite dart tiling and we made ourselves some cookie cutters out of card stock to generate kites and darts quickly. 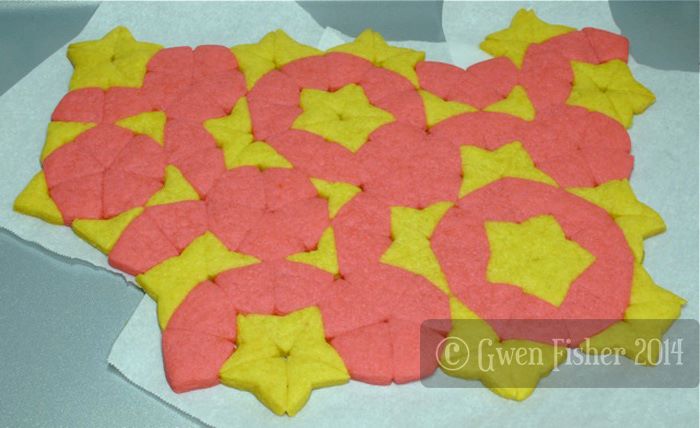 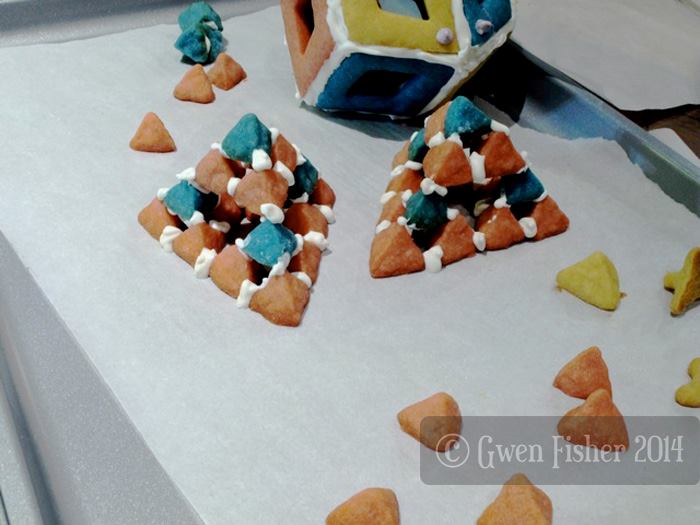 and some shortbread “shortbraids”. The three rings here form an 18-crossing Brunnian link. 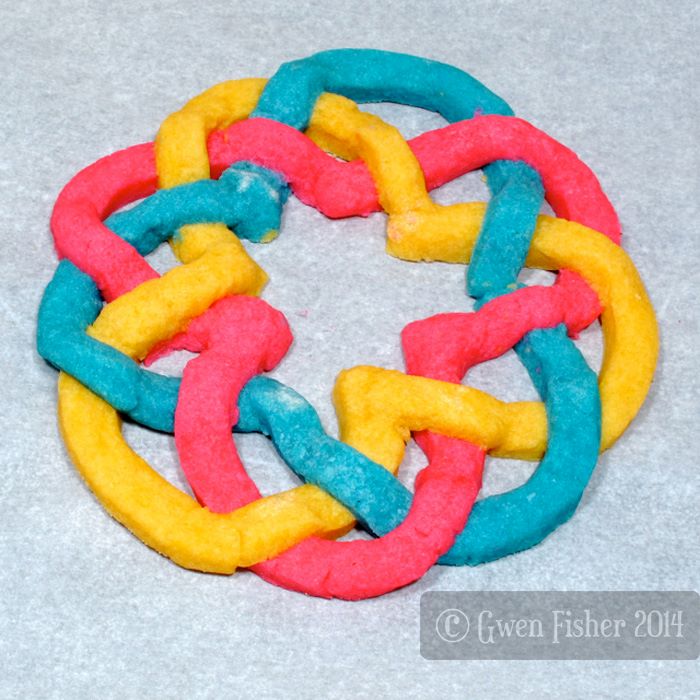