About two years ago, I decided to make a 120-cell out of hair bands. I had just come back from Gathering for Gardner 10, where I had helped my friend Zach Abel build a cool, giant rubber band sculpture. This sculpture was fantastic and I loved how boingy it was. I was incredibly inspired by his idea and technique of using elastic bands to create geometric sculpture, and I wanted to try making my own. 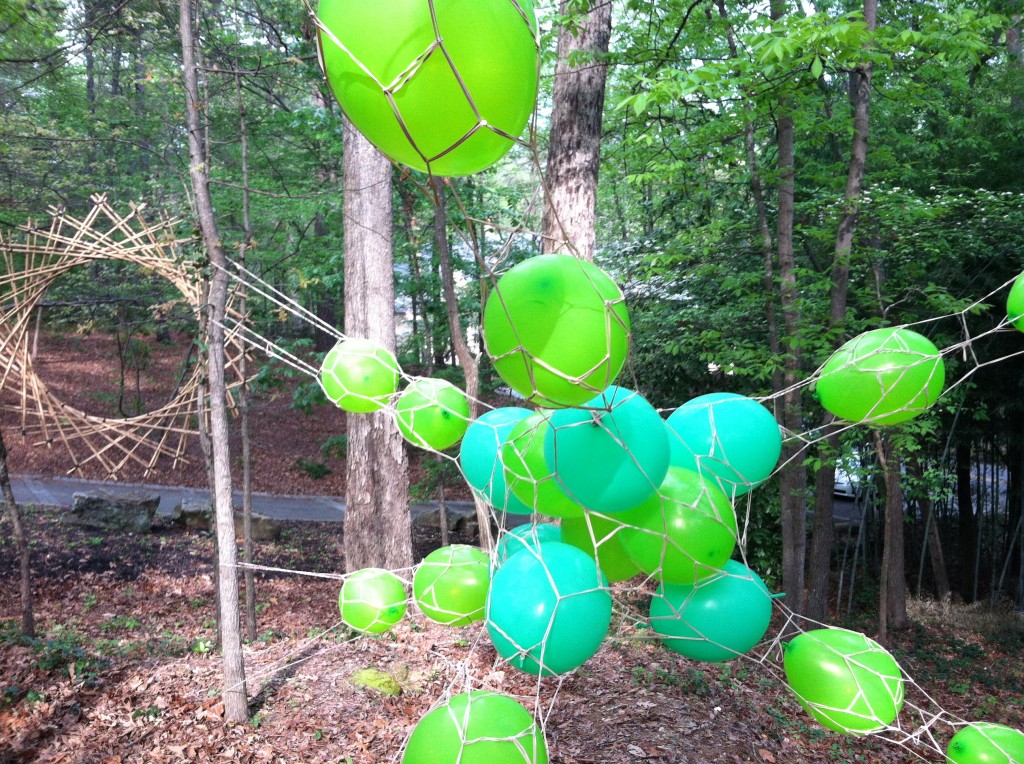 Shortly thereafter, Vi Hart asked me what my favorite polychoron was, a question to which I immediately answered “the 120-cell“. 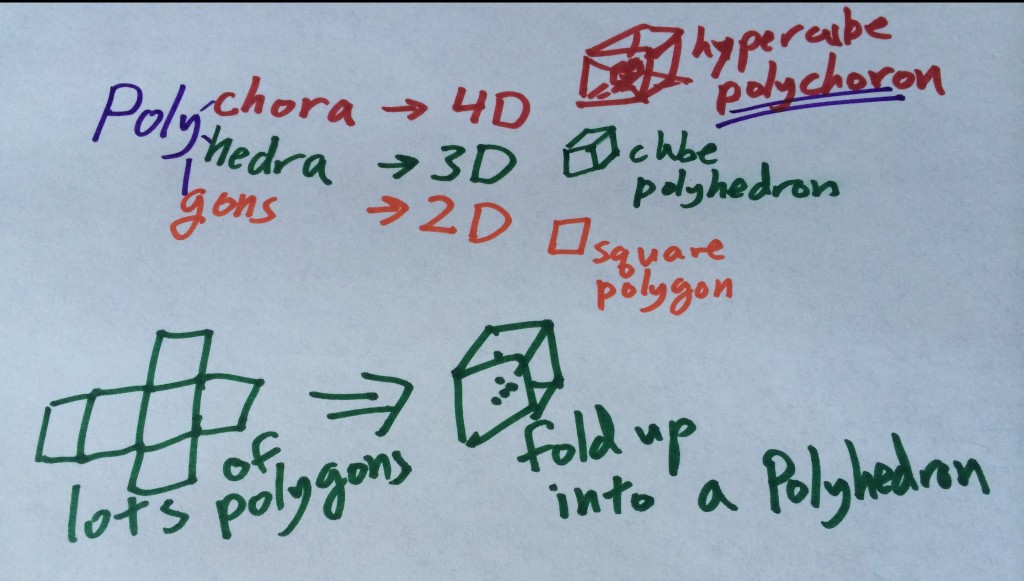 Thus, when I discovered CVS selling colorful hair bands by the hundred, it seemed obvious that I needed to make a giant, bouncy (projection of a) 120-cell out of them. Hair bands seemed like a natural thing to use for a 120-cell. Their natural stretch means that you don’t need to get the lengths exact (just close), they come in all kinds of colors, and they have a truly delightful sproing to them which encourages people to really interact with the final sculpture.

I immediately purchased 600 hair bands (buying out the CVS in question), and got started. I particularly like the way that the Schlegal diagram of the 120-cell shows all of the edges and vertices and has a regular dodecahedron in the very center and one on the outside, so I knew that my 120-cell was going to use that projection and have 1200 edges, so this seemed like a good start. I assumed that I would be able to return to the store once I’d used up my hair ties and buy some more. Unfortunately, what I hadn’t account for was that CVS doesn’t actually restock that quickly. Moreover, since only the innermost edges of the sculpture were a single band length, and I was using a color scheme to keep track of my place in the sculpture, I was going to need way more than 1200 hair ties.

In desperation, I tried hair tie shopping at a different local store, but they didn’t have the same hair bands. I ended up buying out 5 or 6 CVS all across the Bay Area to finally end up with enough hair bands for my sculpture.

With the structure completed, I ran into a different issue. The sculpture was going to be huge and was going to need to be stretched out from multiple corners. It was probably going to fill a whole room, and I didn’t actually have a spare room handy. Fortunately, my boyfriend had a small extra bedroom in his apartment, and, one weekend we took a bunch of 3M command strips and attached it above the bed, which was awesome, but also a bit strange. This picture was carefully cropped to hide the bed. 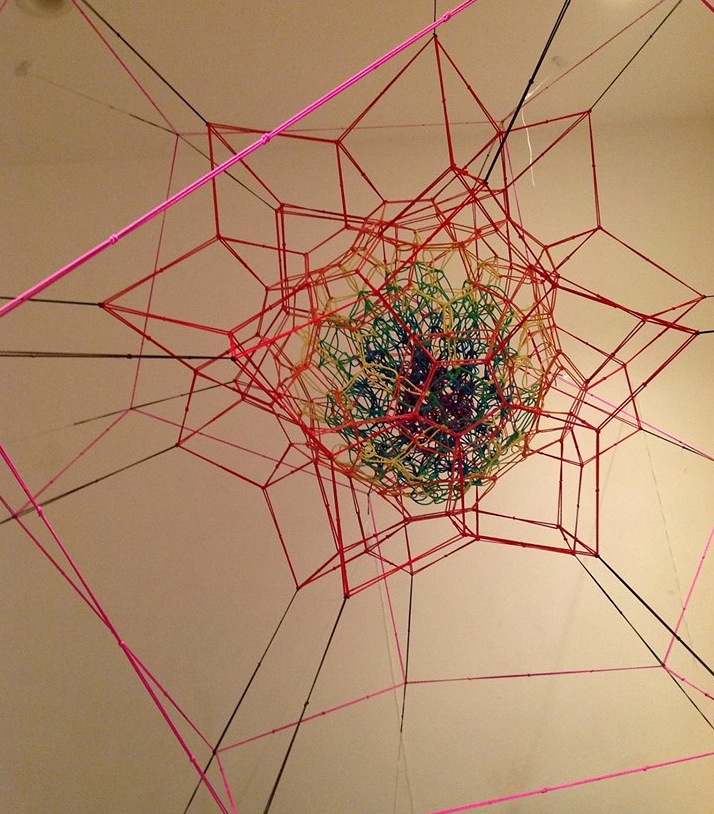 Not long thereafter we ended up taking the 120-cell down. Above one’s bed just isn’t a good permanent location, and the 120-cell languished in a bag for over a year before I had another opportunity to put it up in a small room in the CDG office. 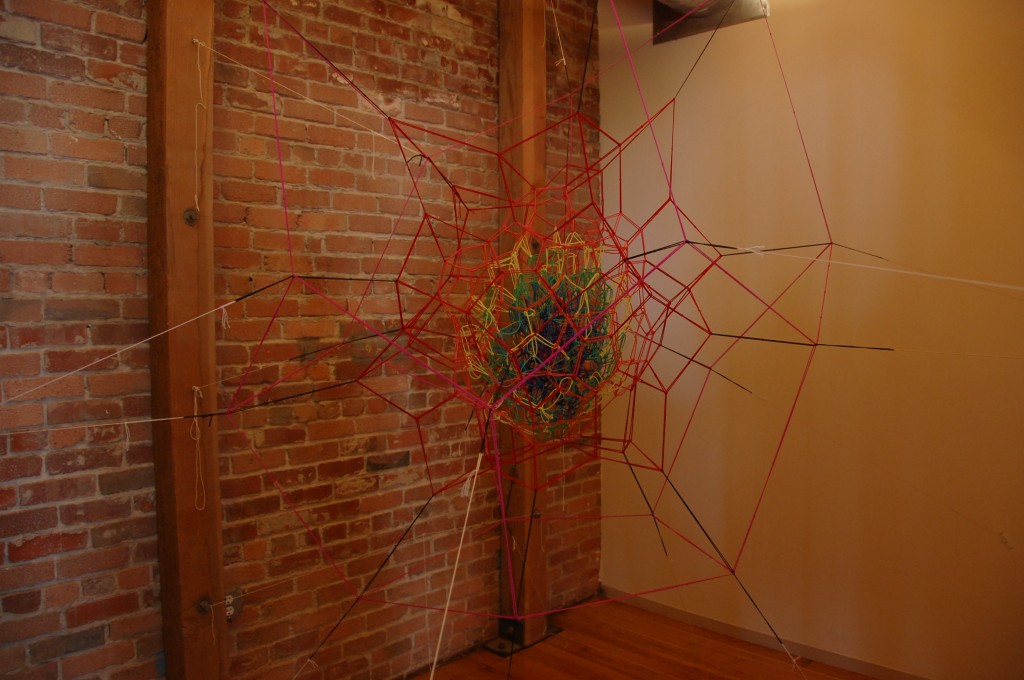 Did I mention that the 120-cell is rather large? 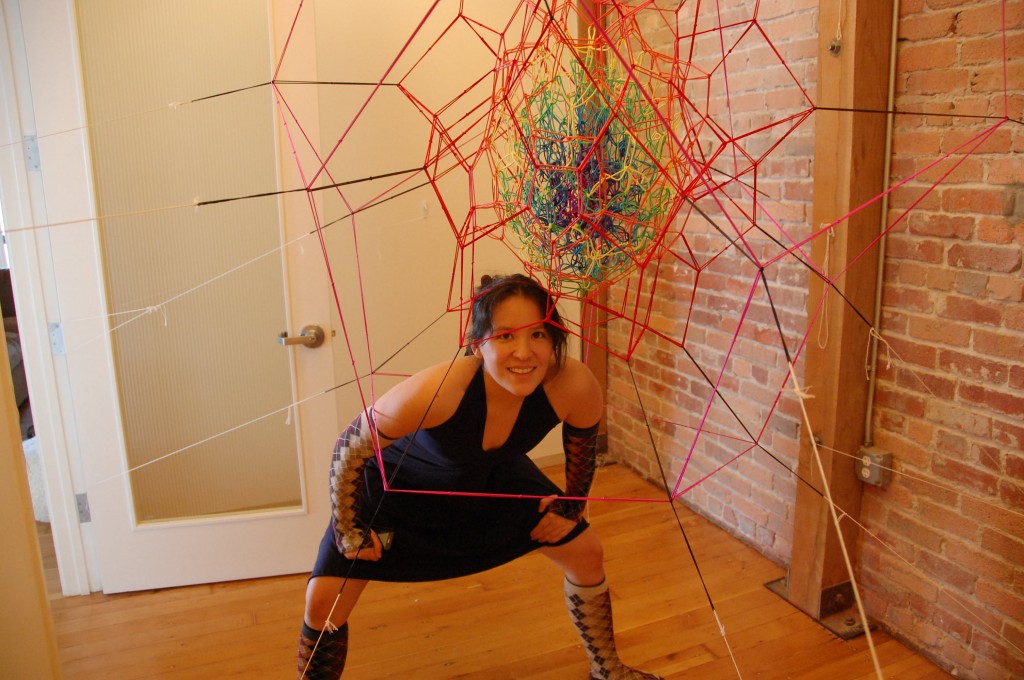 Check out this Youtube video to learn more about the hair tie 120-cell. 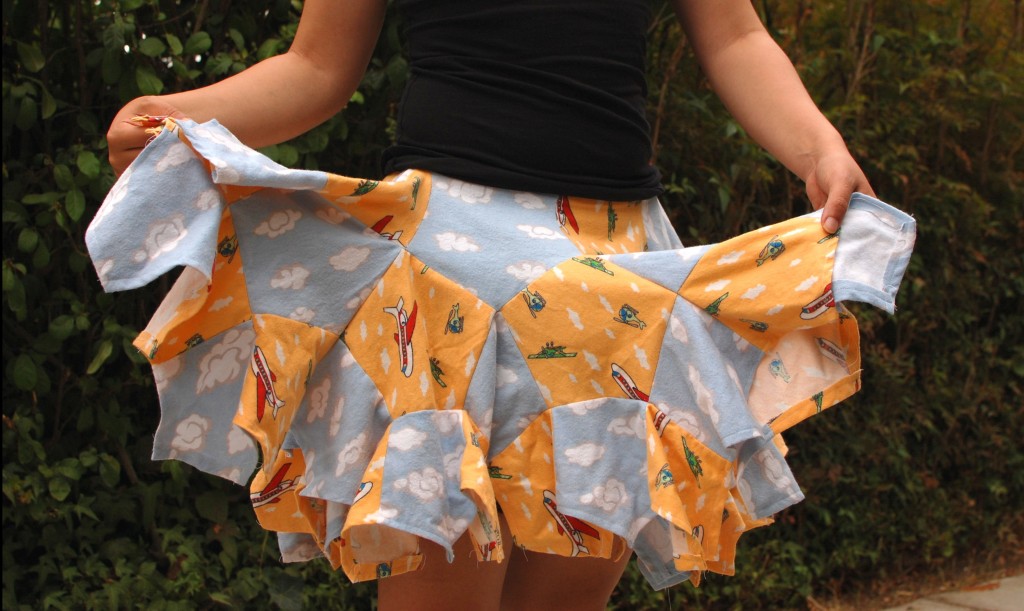 You might have gathered from my last post that I’ve been doing some sewing lately, and, while nearly all sewing projects require math, it’s probably not surprising that my latest project involved a bit more math than most.

See, a while back, my friend Vi, who is rather fond of hyperbolic geometry (though, aren’t we all?) brought a bunch of awesome airplane fabric to one of our math art get-togethers, with the plan of making the punniest hyperbolic plane quilt.

You may already know that the {5, 4} hyperbolic tiling is my favorite (yay! pentagons!), so it’s not surprising that we agreed that the pentagon tiling was the way to go. In particular, the {5, 4} tiling is a regular tiling that checkerboards nicely, has a Gaussian curvature that differs relatively minimally from that of a Euclidean plane compared to other checkerboarding tilings, and requires cutting relatively fewer pieces for the surface area. This makes it a natural choice for a hyperbolic quilt and it is unsurprising that other people who have made hyperbolic quilts appear to have independently made the same choice.

Unfortunately, after cutting a number of pentagons, Vi ended up abandoning the project. Some time later, I inherited her fabric, and, while cutting pentagons in a vain attempt to make the quilt longer (hyperbolic space just has way more space than Euclidean space, and tiles required is exponential to the desired radius), it occurred to me that what I really wanted wasn’t a quilt, but a skirt.

I seam-ripped a hole for the waist, used up nearly all of the fabric making a skirt long enough to actually wear outdoors, and spent a truly ridiculous amount of time hemming to create the worlds first hyperbolic airplane skirt. 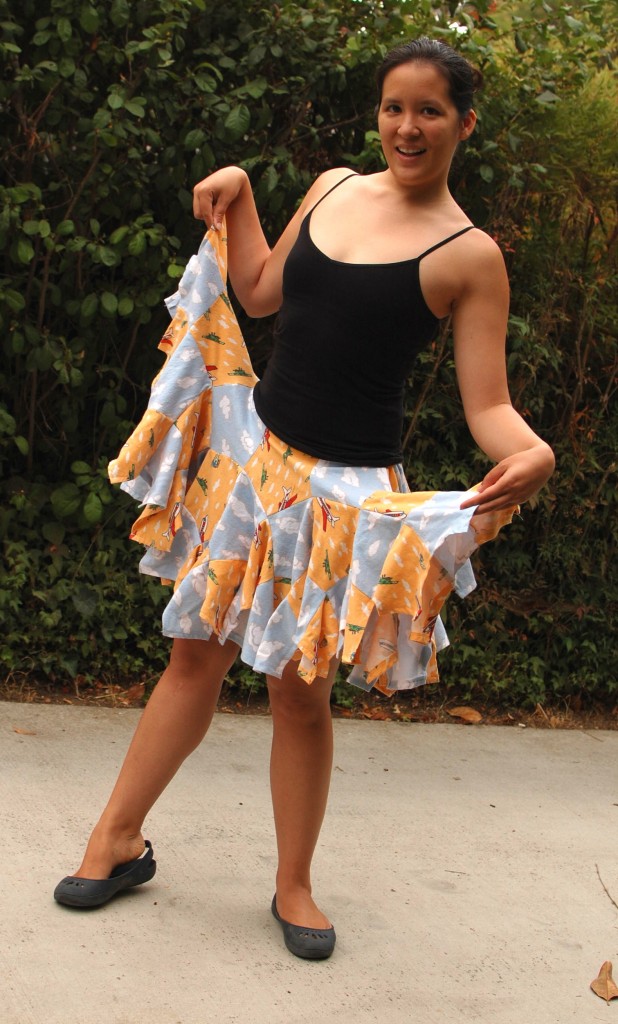 Here are some take aways if you want to try making your own hyperbolic skirt.

Finally, hyperbolic skirts have the most amazing swoosh. Wheeee! 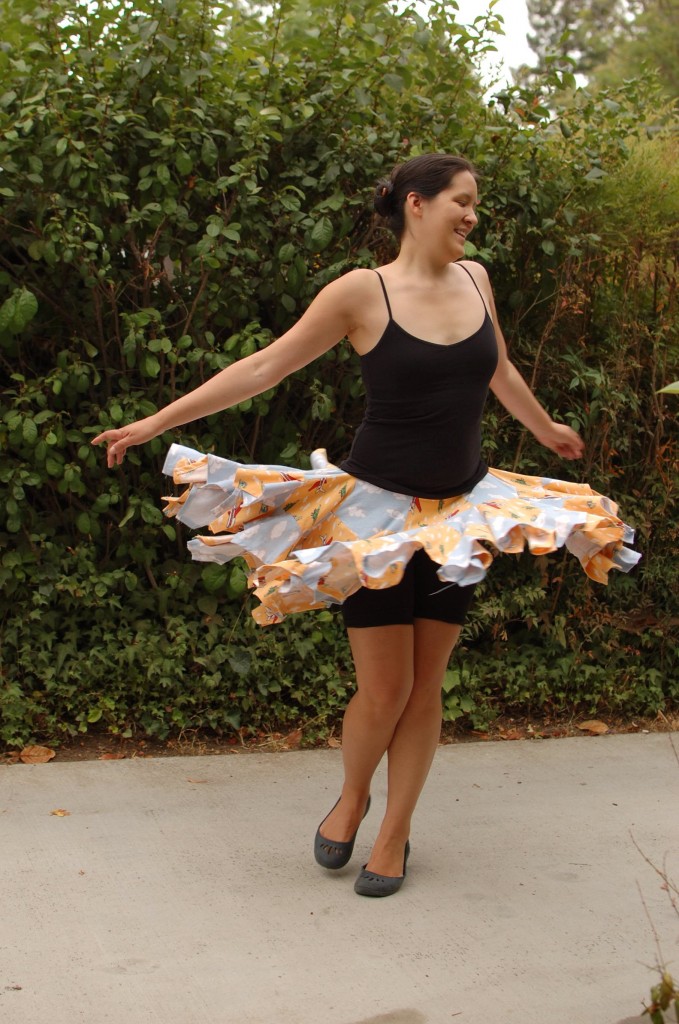 Edit: By request, here are some extra pictures and sewing tips. Lighting conditions were different, so the skirt looks a bit more vibrant in these pictures. 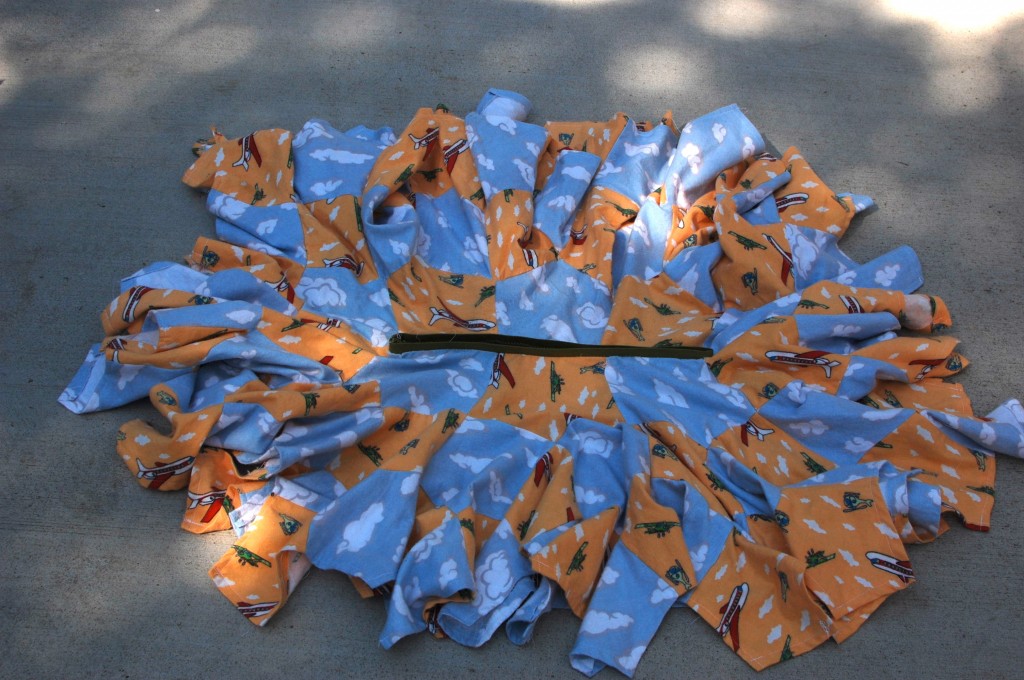 The waistline is literally just a slit in the hyperbolic plane that happens to be the right size for my waist. When the dress is laid flat like this, with the waist closed, you get a nearly seamless hyperbolic plane. I added some green elastic (to match the airplanes!) for the waistband.

The skirt has two lines of reflectional symmetry – the front and back are the same, as well as the right and the left. Towards the end, I folded the skirt into quarters along the lines of symmetry and carefully made sure that they were really lines of symmetry.

I generally sewed two or three patches together, then sewed groups of patches onto the skirt. Sewing on groups of patches let me avoid having to sew corners – instead each patch set could be added as a roughly straight line.

Finally, here is what the skirt looks like when not being held out or whirled: 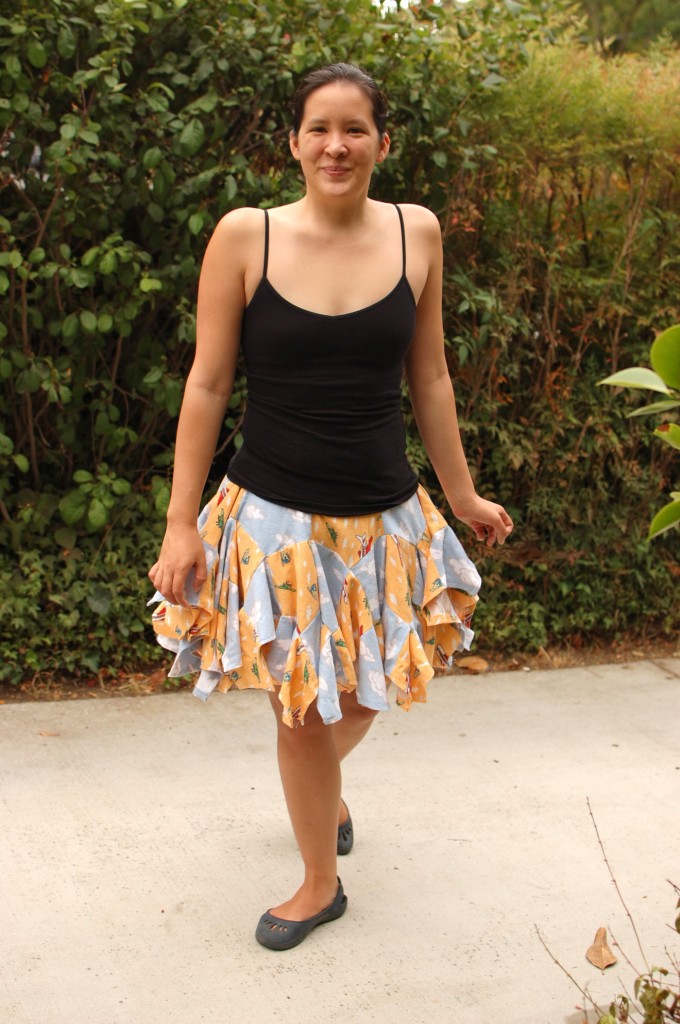 I run into a lot of people who tell me that they don’t like math. It seems to be “cool” to claim that you dislike math (a result, I suspect, of the tedious and uninspiring way it is often taught in schools), and a lot of the things I do and write are intended to stimulate the realization that math is awesome and appears naturally in practically everything.

These are all things where the math is *already there*. It just needs to be pointed out.

But the fundamental, required math in some things, like sewing, is so obvious that it would seem like it shouldn’t require a discerning eye to notice it.

Which is why I was taken aback when I met a professional clothing and sewing pattern designer who promptly informed me that she “doesn’t like math” when I mentioned what I do for a living. “But, doesn’t sewing require a lot of math?”

“It does. But I only like sewing math, not regular math.”

I didn’t get a chance to delve into this deeper, but I really wish I had because being good at the math involved in sewing is an awful lot like being good at the basic math that is taught is school, and, simultaneously, actually understanding how useful it is.

Off the top of my head, designing and adjusting sewing patterns requires a fairly good understanding of arithmetic, fractions (notorious for being the place where math loses people), geometry (including lots of circles!), and algebra. My best guess is that a lot of people learn the math required for sewing in a way that is more intuitive and immediately applicable and understandable than the math that is taught in schools. But it still seems odd to me that they would partition those math skills off as being something “different” and “more likable” than, well, math.

I do also wonder if the dislike of math is somehow trendy, or if there are gender norms involved. Seamstresses are traditionally female, while mathematicians are traditionally male. I, personally, went to school in a district where top students would turn down positions on the Mathcounts team because “girls don’t do math”. It would not be a difficult stretch to imagine those girls turning into women with real math skills who enjoy sewing, but have an aversion towards “mathematics”.

Have you ever met anyone who disliked math even when it seemed like they really ought to like it? Do you dislike math or have your own theories as to why someone might? I would love to get other peoples insights into this.