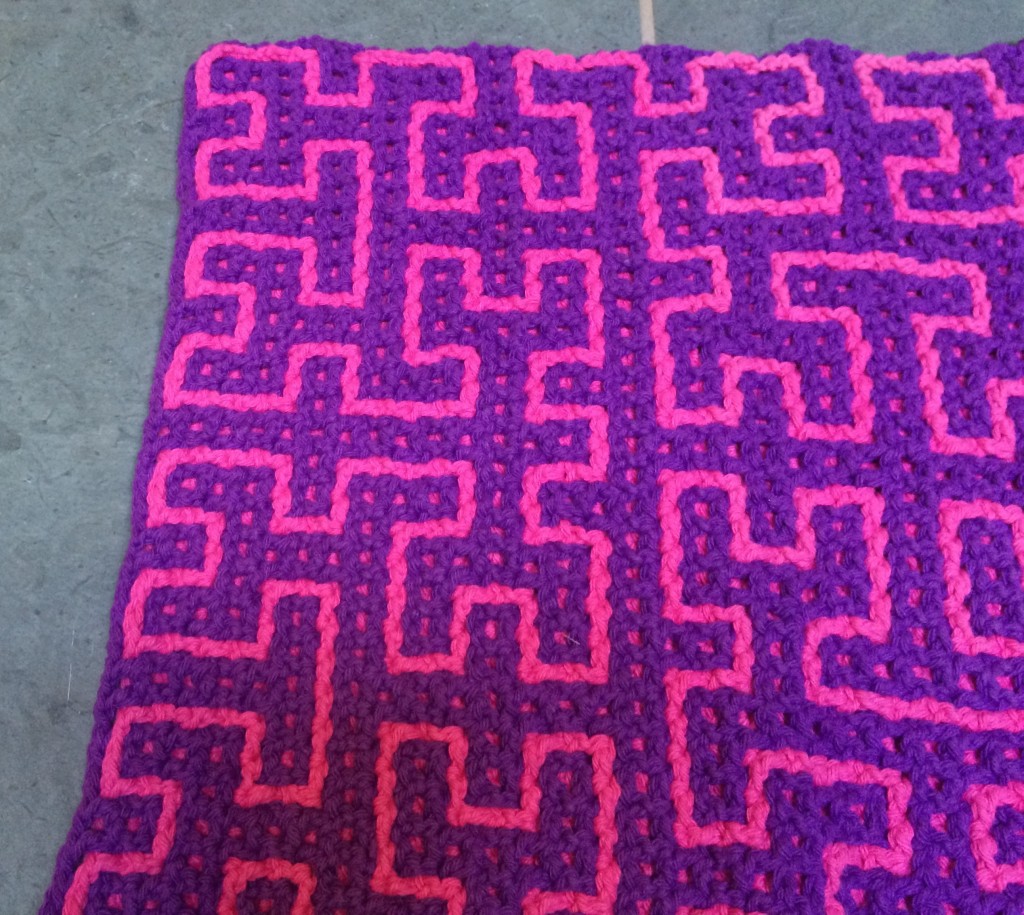 I’ve always been a crocheter rather than a knitter. It’s not that I can’t knit, it’s that I’m so much better at crochet that I just generally can’t be bothered with knitting. These days, I barely do either as they have sadly joined the list of activities that make my wrists and hands hurt. But, when I was younger, I spent quite a lot of time crocheting, and I’m still quite competent and knowledgeable about all of the different crochet techniques.

Crochet is a great medium for creating math art and there are some amazing mathematical crocheters out there. Even a beginner can easily create a Mobius strip. Actually, that’s probably the number one mistake that beginners make when attempting to crochet in the round for the first time. Braids, Klein bottles, Seifert surfaces, hyperbolic surfaces, and two dimensional patterns of all kinds all come very naturally to crochet.

I was surprised to see a crochet technique I was completely unfamiliar with at the 2012 Bridges Math Art Exhibition. Kyle Calderhead exhibited an impressively large afghan created using the “interlocking mesh technique“. This two-color technique is fundamentally different from every other color change technique.

In an interlocking mesh piece two differently colored meshes are crocheted at the same time. As you crochet, the meshes go in front of and behind each other, but at no point do they actually merge or intersect. That is, you never stitch one color into the other color, you merely choose which mesh is “in front” and which is “in back” at any given time. This technique is usually done with square meshes, but Kyle Calderhead has expanded upon this too, creating this very nice Afghan using a hexagonal grid and a space filling curve.

I’ve wanted to make something using this technique myself ever since seeing Kyle’s afghan in 2012, but I only recently actually sat down and tried it, creating this level four Hilbert curve afghan. 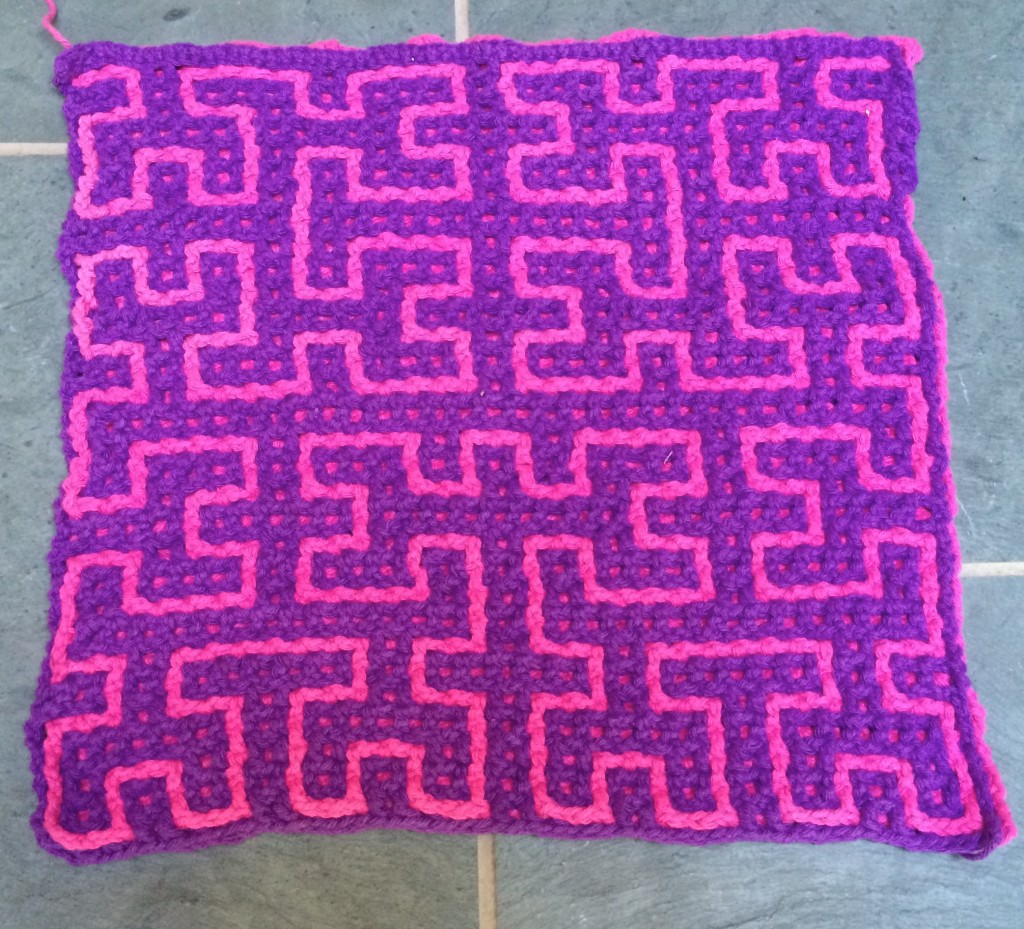 Hilbert curves and other space filling curves (like the one that Kyle created on the hexagonal grid), are obvious choices for this technique as they have lots of color swaps or “interlocks”, where the back color shows on the front. These are necessary to keep the two meshes attached to each other. A pattern with absolutely no color changes would literally end up as two separate crocheted meshes. Regular swaps, especially at the edges are important to keep an interlock crocheted piece connected.

Regular color-changed crochet, like the Sierpinski Triangle below, has the property that the front of the piece looks more or less the same as the back. The colors that aren’t being shown are “carried through” the middle of the stitches to give this clean look on both sides.

In constrast, interlock crochet has one mesh that is decidedly the front mesh and one that is the back mesh, with color changes being created by swapping which mesh is in front. This means that the back of an interlocking crochet piece can be the same as the front, but the vast majority of patterns (and any randomly chosen pattern) will be substantially different on both sides.

What does this look like? Well, for my Hilbert curve afghan, I’d say that it makes the back fascinating, but barely recognizable. The vertical pink lines on the front of my piece turn into horizontal purple lines on the back and vice versa. 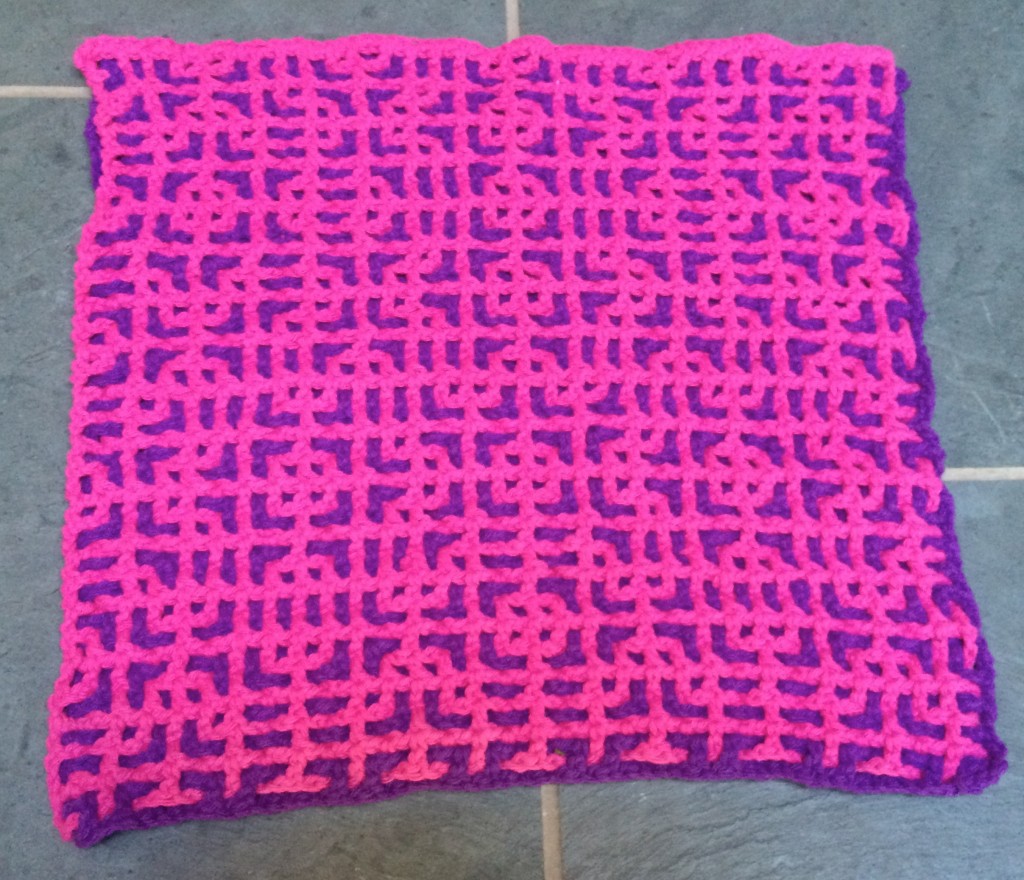 You’ll notice that the back of the piece has solid lines of pink running vertically and horizontally, while the front has full mesh squares of purple. That’s because my Hilbert curve isn’t as iterated as it could be for this mesh. With the same number of mesh squares I could have created a fifth order Hilbert curve, but I ended up only creating a 4th order curve. With a fifth order curve all of the mesh holes would be filled with color, and there would be no solid pink lines on the back. As it is, my space filling curve isn’t quite iterated enough to truly fill the mesh space provided for it.

This is primarily an artifact of this being my first try at this technique. I was already a third of the way done with this square before realizing that I should have made a fifth order curve. I’m especially disappointed because the back of the fifth order curve would really be much more interesting.

So, now my project is to make a second, third, and fifth order curve on the same size mesh and then combine all of them into a larger afghan that shows one curve that iterates further in each quadrant. But, thanks to my hurting hands and limited patience, I rarely complete more than one small crochet project a year, so you can maybe look forward to that in 4 years or so… 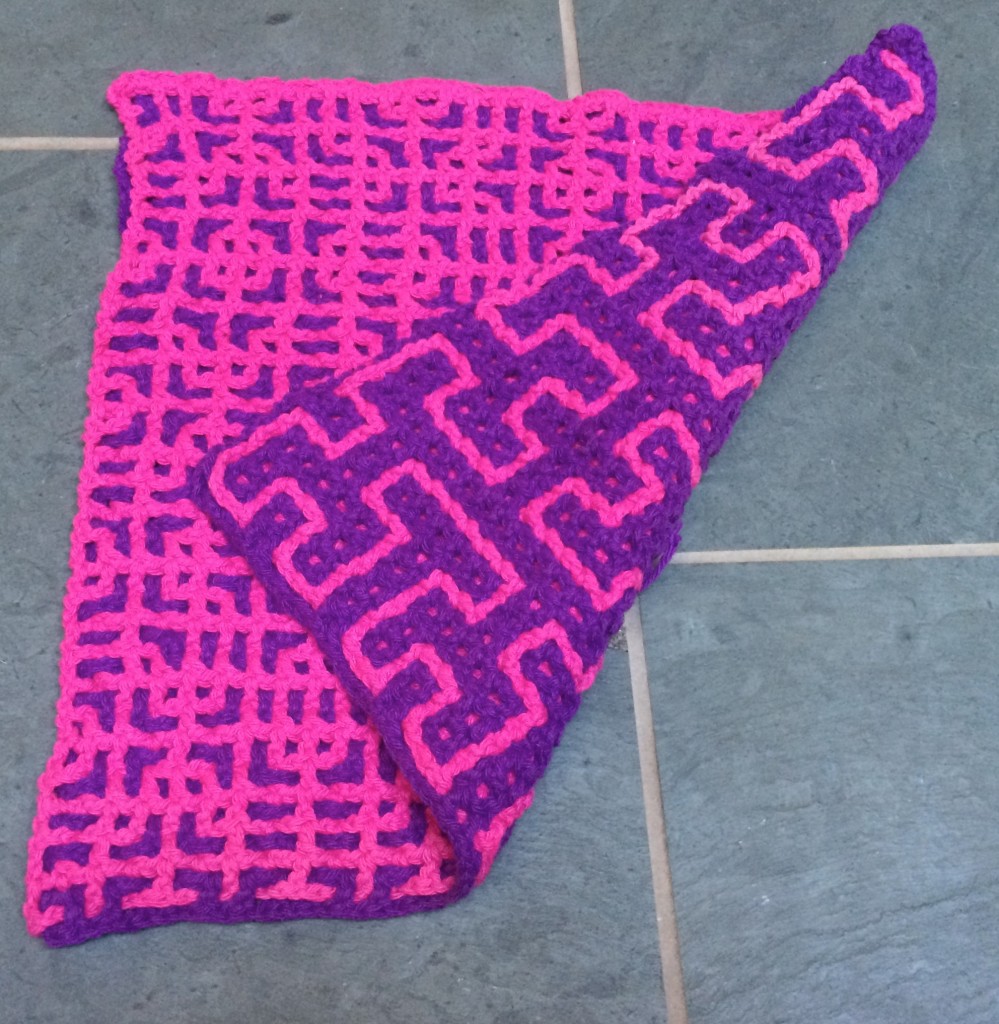