One of the things that I love about mathematics is how deeply and subtly it permeates the world around us. Complicated math concepts are often represented in everyday things. In keeping with the season, we might even say that the math is dressed up “in costume”.

Dance, with it’s connections to rhythm and standard moves or patterns clearly ought to show some connections to mathematics, and it’s one of my favorite examples of “math in costume”. Traditional set dancing, where each dance consists of a group of people moving in predetermined patterns such that each person ends up at a designated place at a designated time hints at that connection quite strongly, but it’s not always obvious what connections exist.

So, let’s try to find it by asking some questions. My dance group once asked an interesting question about part of the choreography in the video below. Some, but not all of the people were getting back to their home positions when performing a traditional figure known as the Waves of Tory, which starts at 1:33.

In the Waves of Tory, couples form a long line and at each iteration a couple alternates between arching over the next couple or ducking under the arch of the next couple. The first couple begins by moving towards the end of the line. The remaining couples begin by moving towards the beginning of the line. Once a couple reaches the end of the line, they spend one iteration turning around to head in the opposite direction.

The reason for dancers not ending up where they started is intuitive – there is a staggered start, but everybody finishes at the same time, so there was no way for all performers to end at their home positions. But, how can we figure out precisely where each couple is going to end up?

In more mathematical terms, we want to know where the i-th couple would be after n couples danced the Waves of Tory for k bars of music. Go ahead and try to solve this problem on your own if you like, then keep reading to learn about how this example problem helps unveil some of the underlying mathematics hidden in dance in general.

Have you figured out what the dancers are doing? We can describe their movements like this.

Let’s call the top couple that faces down at the start of Waves is Couple 0. The other n-1 couples are then Couple 0, Couple 1, Couple 2, … Couple n-1. At the start, the i-th couple is standing in the i-th position. The i-th couple starts movement on bar i.

As the dance progresses,

Ok. So there was definitely math there, but it doesn’t really feel like it’s really some other math concept in costume.

Or does it? It certainly seemed very familiar to me as I was solving it, but it took me another half hour or so to make the connection. 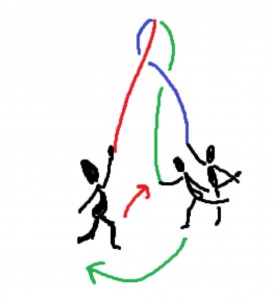 The motions of the dancers seemed familiar to me because they were moving exactly like the strands in a standard n-strand braid. The connection is easy to see if we just imagined ribbons hanging from the ceiling, with one attached to each dancer (or pair of dancers in this case), like in a Maypole dance.

And this realization applies to almost all dances, not just the Waves of Tory. A partner dance where two partners spin and twirl around each other is equivalent to a braid on two strands, and, just like the braid group on two strands, it’s isomorphic to the group of the integers, Z, under addition!

Want to prove that the braid group on three strands is non-Abelian (does not commute)? Just find two friends and dance around each other a bit!

And, since dances and braids are really dressed up as each other, you can not only figure out what braid you are making with your dance, but you can also figure out how to dance your favorite braids. Here are some of mine on five strands (for five dancers). It’s possible to come up with rule that every dancer follows independently that will give you each of these patterns. 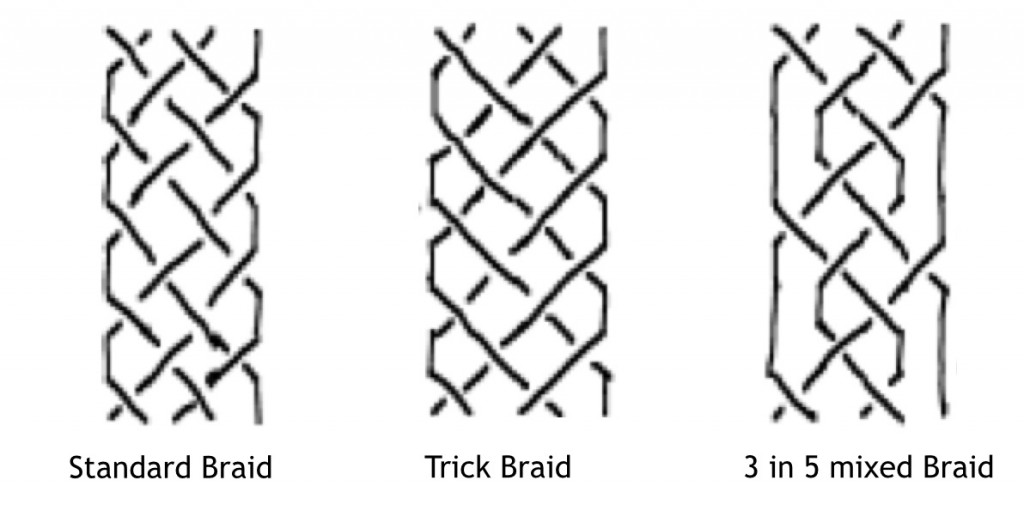 So, this Halloween, I’m finding a partner, dressing up as dancers, and explaining to anyone that asks that I’m dressed up as the integers under addition. After all, math does it all the time.

The Celebration of Mind (CoM) is like a series of mini-Gathering for Gardner‘s that happens all over the world around the anniversary of Martin Gardner’s birth. If G4G has always looked like fun to you but you haven’t been able to go, I really encourage you to attend a Celebration of Mind.

Admittedly, I’m a bit late to the advertising, since some of the CoM events have already happened, but there are still plenty more to go (the 100th anniversary of Martin Gardner’s birth isn’t until tomorrow!).

Last weekend, I went to the Stanford CoM event and listened to some fun talks about an assortment of Martin Gardner related things. For example, Donald Knuth talked about Martin Gardner and the number 100 in honor of Martin’s 100th birthday. For the second half of the event, I ran a workshop where we did modular origami with business cards. There were a bunch of other neat workshop type things going on at the same time, but I’m afraid that I had to miss all of them.

I taught the smaller kids the standard six card cube (originally designed by ???, certainly rediscovered many times due to simplicity). Some of the adults entertained themselves by reverse engineering models that I had brought to show off. I also taught several people the module used to create a rhombicuboctahedron (a design that I discovered on my own, although, again, it would be far from shocking of someone else had made it first. Although, interestingly, I haven’t seen it anywhere else myself, so…).

If you want to check out a similar event in your area, you can search for one on the official CoM page.

By the way, if you’re in the Bay Area and are sad about having already missing out on this event, then you’re in luck. There is another CoM in Berkeley on the 26th, so you get a free second chance to check it out for yourself! 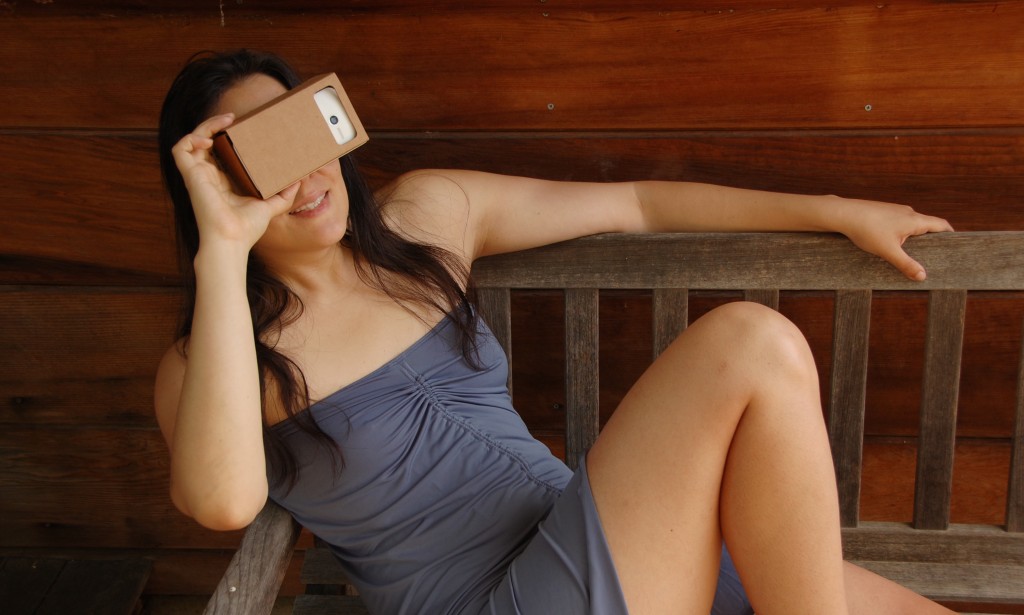 When I first started this blog, it was really just a generic medium to share what I’ve been doing with my life. As it’s progressed it’s turned into more and more of a mathematical art and recreational math focused blog, which is awesome, but means that it no longer feels like a great place to share my random vacation photos, non-mathy artistic endeavors, and other fun projects.

See, a few months ago, I got a surprise phone call from my friend Vi.

“Have you tried the Oculus?”

Vi makes videos and, after trying the Oculus, she suddenly felt incredibly limited by the rectangularity of the medium. VR video is the future of video, and she wanted to get in ahead of the curve. Did I want to join?

Together with Emily Eifler, the three of us have been thinking about, experimenting with, and creating live action virtual reality videos – all while sharing our insights and results on the web. We’ve named our research project eleVR, and I think that a number of the readers of my blog here might be interested in the fun, thoughtful, and often quite mathematical things that we talk about there.

I’m probably not going to talk much more about eleVR stuff here. So, if you want to learn about the future of video in probably the most math-y art-y way possible (Did I mention that the eleVR team includes both me and Vi Hart?), then you should definitely follow us at elevr.com.